Great start to the year with Oven King!

This opening week of the New Year, we have been receiving a high-number of phone calls, and even walk-ins from people asking about oven cleans and franchises!

The King is finally in place on both sides of the sprinter-van; even though it was a challenge keeping him on the van due to the high-winds and rain.

A special thank you to Lindsay; “The King” embraces you as one of his valuable, loyal fans, and gives you his most sincere thanks for your continued support as one of his loyal subjects! We would also like to take this opportunity to thank April Stevenson for her lovely, heartfelt email that she sent in, letting us know how happy she was with the work done on her oven. It is great to know that even though it might ‘only be an oven’, that we can bring a small ray of sunshine into these dark, cold days for some people. And we are also acknowledging the fact that she even shunned the competition to keep her loyalty with us.

Due to the success of our last year we are now actively starting to promote the Oven King Franchises. I have today, had the pleasure of meeting a lovely couple from the West Country who are looking to purchase a franchise with Oven King. Spending the time with them was an enjoyable experience. If every Franchisee turns out to be like this couple then I am more than happy to be working Oven King 24-7 alongside my other ventures.

Judging on the first few days of 2014, I hope sincerely, if it continues on this vein, then it should be a very successful year for Oven King and it’s newly appointed franchisees. 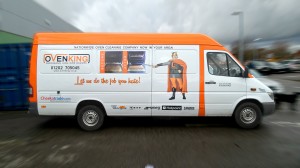 If you have a question, get in touch with us now!